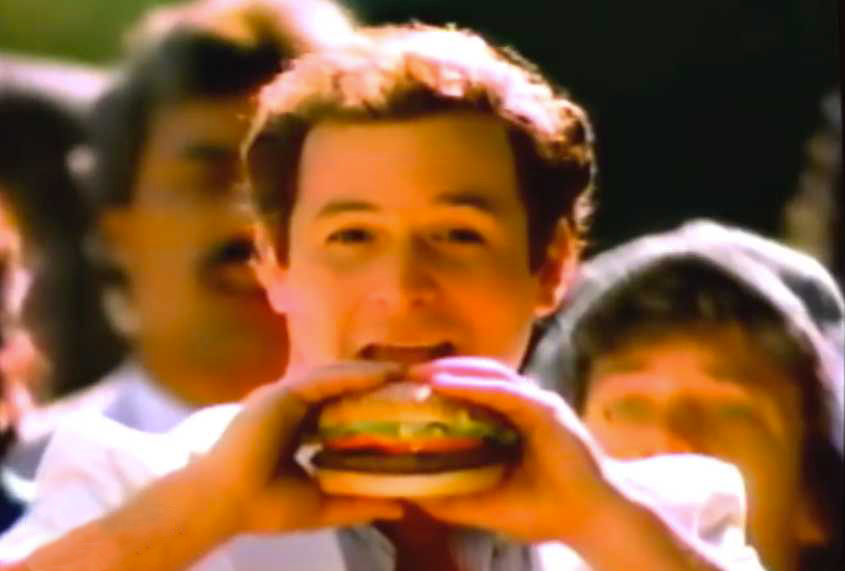 We’re at war with bad burgers.

As gourmet burger gurus, we believe pairing succulent beef with tasty toppings and the fluffiest home-baked buns is a fine art.

Consider this list of Sloppy Sallys a PSA – showing what happens when you leave your taste buds in the wrong hands.

Some things will never belong between two buns. Beetroot. Pineapple. And most definitely Oreo chocolate biscuits.

We’ve come around to your bacon pancakes with maple syrup, but this is one sweet/savoury combination too far.

Just because you can, America, it doesn’t mean you should.

First released by Burger King in Japan in 2014, the Kuro burger was a social media sensation.

Customers lined up to take photos of their ‘chic’ black burgers. But was helping them look like melted car tires?

These edgy burgers, complete with black buns, black cheese and black sauce, had been coloured with natural squid ink and bamboo charcoal.

In the US, the Kuro burger was rebranded as the ‘Halloween Whopper’.

The most troubling element of these jet-black burgers Isn’t that, when the King coloured them, he used every artificial colour in the box. It’s the unexpected effect they had on the human body.

Cheeseburger in a Can (Mahlzeiten Trekking Co., Switzerland)

If you’re tired grazing on granola, nuts and dried fruit when you’re hiking, you could always try Switzerland’s answer to a fireside meal.

The Mahlzeiten trekking company’s cheeseburger in a can is not only an insult to the art of burgers, but has a disturbingly long 12-month shelf life.

The cooking instructions: Pop one of these hateful pucks into a pot of boiling water for 10 minutes.

Only a thin metal film now stands between you and your future, worse self. Peel open the lid and get ready to eat what must truly be the world’s worst burger.

Have you ever looked at your burger and wished that one half was hot and the other half was cold? We haven’t, but apparently someone at McDs HQ did, as did a blurry, Paul Simon-looking Jason Alexander.

Back in 1984, Maccy Ds rolled out one of the most bizarre burger creations ever to reach the grill.

“There was a special heating-cooling machine that we had”, ex-Burger Flipper Ken Forton recalled.

But there was a problem in the Donald’s Factory of Dumb Ideas. The burgers never managed to stay either stone-cold or piping hot. Ken continues, “a lot of locations just used regular heaters, so customers only ever got warm burgers.”

Worse than the lukewarm burger, however, was the packaging. A monstrosity designed to keep the salad cold and the burger hot, the container ended up using enough polystyrene to send Attenburgh into cardiac arrest.

These bulky, unrecyclable containers were reportedly the cause of the McDLT’s demise in 1998. No burger was hot/cold enough to stop these boxes from ending up in a landfill site. Where they belonged.

It's #NationalCheeseburgerDay ! Would you survive the Quadruple Bypass Burger from Heart Attack Grill? https://t.co/AdGLak87OO#cheeseburgerday pic.twitter.com/7024frCcYk

This grease feast doesn’t just live up to American stereotypes about unhealthy fast-food. They champion them and turn the dial up to 100.

Their fries and buns are cooked in pure lard. They’ve got hard-to-track-down, extra calorific, Mexican Coca Cola made with cane sugar. Don’t worry smokers, you can order cigarettes too.

The worst part? Customers who weigh over 160kg get to eat for free. Some Heart Attack Grill regulars have actually died of heart attacks. Some even while sitting at the restaurant.

Just one of their signature Quadruple Bypass Burgers clocks in at 9,982 calories. That’s around 1,000 calories over the recommended daily allowance of a 360-kilogram adult leopard seal. That’s right, we did the maths.