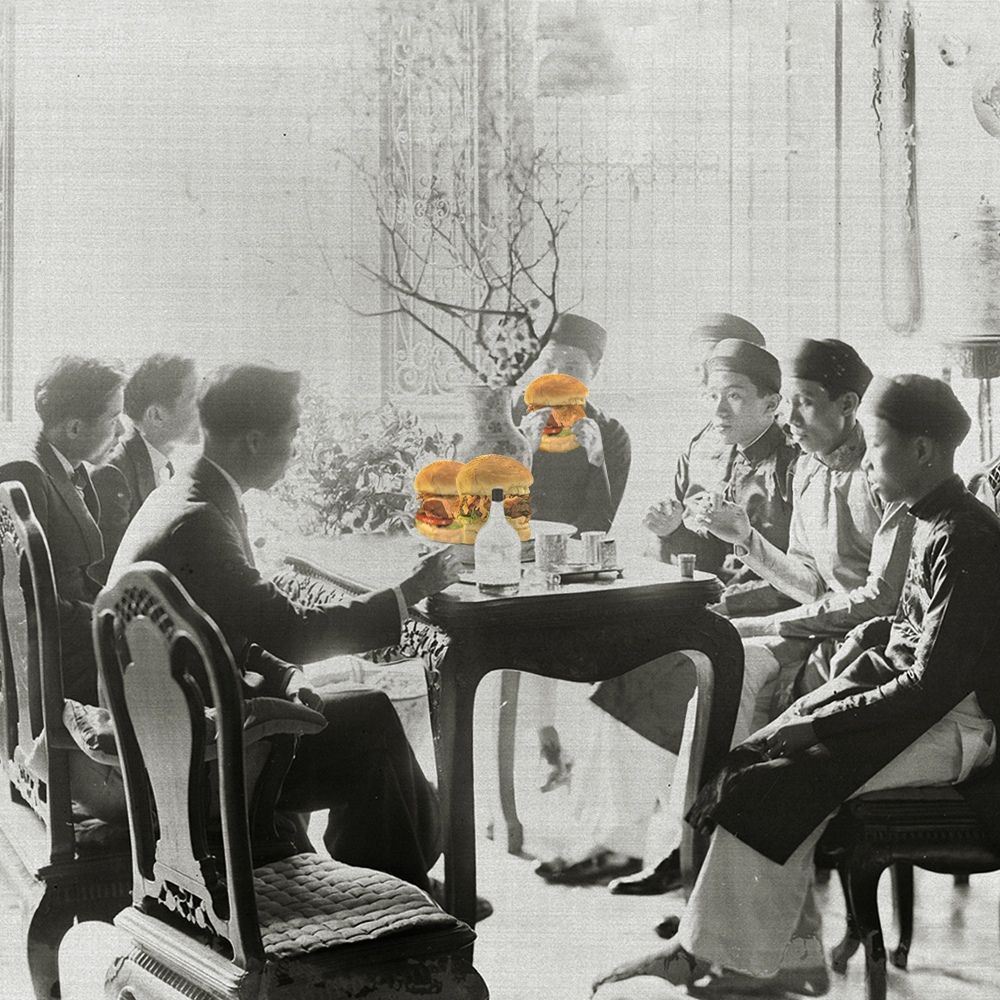 Who planted the first burger flag in Vietnam? What’s the country’s faverout fast food? And who will come out as the real burger kings?

Vietnam, a country of noodle broth, sticky rice, strange fruits and these days, an increasing amount of foreign food.

But what’s real Vietnamese food, and what’s a burger mash?

With a horrendous history of colonial influence, growing wealth among the masses, and an increasing number of expats driving up the desire of foreign cuisine, the country’s culinary history is changing.

We’re going to explore it the only way we know how: by talking about burgers.

In many ways, the idea of chowing down on western grub is hardly new. If you want to thank someone for today’s eclectic food offerings, you might want to start with the French colonists.

When they weren’t barbarously attacking the locals, charging them to drink their own alcohol, or just being generally terrible, they were introducing new gateway western foods.

Consider the great burger philosophy question of the ages: is a burger really a burger without bread? Not unless you think wrapping beef in lettuce a burger.

While you can trace bread in Vietnam back to the spread of Christians in Asia in the 17th century, the banh mi as we know it today wasn’t born until the late 50s.

It was only then, in Saigon, that Mr. and Mrs. Le made the first Viet sub.

These two culinary geniuses shoved a mix of meats, herbs, and veg directly into the bread, instead of eating it all separate like the French. This subsequently invented Vietnam’s favourite fast food takeaway, the banh mi!

For about 40 years the good people of Vietnam were happy chowing down on pho and banh mi for their meat and carb fix.

Everything more or less changed, however, with the arrival of a certain bearded Colonel in China in 1987, with Vietnam hot on its heels.

It’s 1997 and the Super Bowl Saigon Trade Center is abuzz with whispers of a new American fast-food chain. Vietnam’s been open to tourism for a whole five years and the country is brimming with American-like optimism.

The trouble was, outside of a quick slap-up meal on the street, the concept of fast food was pretty alien in the country.

For seven years the Colonel struggled to win the hearts and stomachs of the Vietnamese. Everything came together in 2006, when KFC finally started turning a profit. This ushered in a new period for western food.

With KFC having already done the leg work, the mid-noughties seemed prime for other fast-food chains to enter the scene.

First was Jollibee, a Filipino chicken and burger chain. Then came South Korea’s Lotteria with their saucy Bulgogi and Teriyaki burgers.

Burger King followed in 2012, and, after ‘years of research’ by the fast-food giant, the golden arches of McDonald’s were erected in Ho Chi Minh City in 2014.

It’s no secret that Big D’s have had their fair share of problems in Vietnam. Their big plans to open up 60 restaurants in the country by 2020 fell short, only ever managing a meager 23, with just four of those in Hanoi.

Think that’s bad? Burger King only ever managed 13 in the whole country!

So, why did these burger flippers end up being burger floppers?

It’s not like western food doesn’t work in Asia. With 2,500 McDonalds in China and 2,975 in Japan, it’s safe to say that meat in bread is an international superstar.

Some say it’s the price. Some say that this so-called ‘fast-food’ hardly lives up to its title when compared to your super-speedy bowl of noodles or roadside banh mi.

Fingers have even been pointed at its lack of sharability – people who have obviously never seen point three on our ‘Is it Ok to…?’ guide.

We like to think it’s the bland taste and over-produced ingredients.

Vietnam’s a country of discerning eaters with a local cuisine full of fresh, flavoursome ingredients. The fast-food giants with their processed and imported food just don’t cut the cheddar (quite literally).

A brave new world (of burgers)

Chops may be a small fry in the wide world of burgers, but we’re doing something right in Hanoi. We opened up our doors in 2015, ushering in the new era for burgers in Vietnam.

People like to ask what that special sauce that makes Chops stand out from our floppy patty competitors. Top-quality, fresh, locally sourced ingredients, and a bucket full of burger love. That’s it.

With these key ingredients, we’ve opened up three restaurants in the capital city, nearly outnumbering McDonald’s. How many gourmet burger spots can say that?